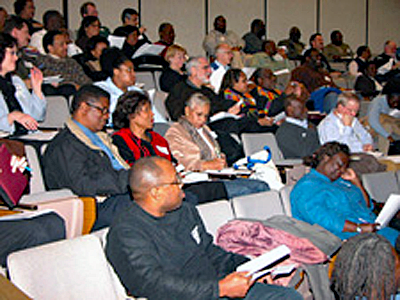 In January of 2006, Africa On Fire Missions (AOF) took a group of eleven people to the Columbia International University annual Missions Seminar. The theme that year was to be the PEACE Initiative, proposed by the pastor of the Saddleback Church, to provide a comprehensive approach to mission. The AOF group was troubled by the fact that outside of its own group, there were only one or two other African Americans there. AOF's Director, Dr. Peggy Rayman, approached Dr. Cashin, the sponsor of the seminar, and asked if he knew why--if the theme was to provide a comprehensive approach to mission--there were so few African Americans there? He said that was a situation he was aware of, and troubled by. He asked if there was a way he could get connected with the organizations that were mobilizing African Americans for world missions. He said that if AOF would work with him on this, that next year he would invite some African American mission leaders to do workshops at the conference

As the planning for the 2007 conference progressed, Dr. Cashin felt led to expand the idea of having a few workshops on the topic of African American mission mobilization, to having the entire conference cover this theme. Discussion then ensued to include work on a document that would leave a lasting impact on the mission community. Using the models of the Lausanne Covenant and the Manilla Manifesto, the plan for an African American Missions Manifesto was born. The vision was to have a document that would act as a unifying point for those that are involved in the mobilization process among African Americans, as well as a tool to use to mobilize other African American pastors and churches to get involved.

Minister Vaughn Walston (missions mobilizer for the Impact Movement ) was asked to chair the Manifesto Committee, and he ably drafted most of the Manifesto's main sections. Other committee members were:

Mr. Bill Porter, then Executive Assistant to Dr. David Cashin of Columbia International University, convened conference calls, provided some input, and kept the process moving along well. Over several months in the fall and winter of 2006, committee members analyzed, critiqued and modified a series of drafts. In fact, this process continued through the very start of the "African-American Church in Missions and Its Influence on Missions in the 21st Century" seminar, January 19-20, 2007, held at Columbia International University, Columbia, South Carolina. On January 20, the Manifesto was read to those in attendance. It was approved by acclamation, lines enthusiastically forming to personally endorse the African American Missions Manifesto.